"For years the international community has spent considerable effort to promote stability by reforming and strengthening security sectors in fragile and conflict prone states. These efforts have met with mixed results, however. The international community must therefore find alternative ways to better understand security sectors’ potential contribution to stability." (HCSS report 'The Good, the Bad and the Ugly' Kool & Sweijs)

Missed the livestream? Watch it here!

The Netherlands Ministries of Foreign Affairs and Defence invite you to a webinar about Security Sector Reform on Thursday 17 June 2021 between 14:00 and 16:00 CET.

This webinar is a cooperative effort of the Netherlands Ministries of Foreign Affairs and Defence. It is supported by the Hague Centre for Strategic Studies and the KVBK. In this webinar, several subject matter experts will present and discuss their views and approaches concerning Security Sector Reform (SSR) as a strategic policy tool.

Is SSR a double-edged sword or can it contribute to conflict prevention and long term stability? Effectively engaging with security sectors requires understanding context-specific challenges and an integrated way of working. How can we incorporate this conflict-sensitive perspective in decision making and response? Is it time to rethink our approach?

15.15   Panel discussion based on questions from the audience (1CMi, HCSS, DCAF, TI and ASSN)

15.55   Closing remarks by the moderator

Should you have any questions, please send an e-mail to contact.ssrwebinar@gmail.com

Erwin is a Senior Research Fellow at the Clingendael Institute where he leads a research team focusing on conflict dynamics in the Middle East. He is an experienced moderator with a great deal of expertise on Security and Justice in Fragile Conflicts and the relation between political order and tools of coercion, especially the role of hybrid armed groups in processes of state development. His previous experiences include roles as peacebuilding and conflict specialist at the OECD (2010-2013), security and development advisor at the Dutch ministry of Foreign Affairs (2006-2010) and human resource business advisor at Shell (2003-2005). Erwin obtained university degrees in public administration, security sector management and EU politics. View profile

After a study in International Relations at the University of Utrecht, Ms. Sonja van der Meer started her career in 2001 at the Netherlands Ministry of Foreign Affairs. She held several positions in the field of security, human rights and the UN. In 2008 she transferred to the Ministry of Defense, where she worked on the Horn of Africa, Mali and the UN. Ms. Van der Meer is currently head of the Conflict Prevention Team, that aims to develop policy on the topic of conflict prevention and generally promotes a more forward-looking approach to conflict. View LinkedIn profile

Lars Walrave attended officer training at the Royal Netherlands Naval College and obtained a doctorate in international law from Utrecht University. Following his officer training, he fulfilled various operational and staff positions within the Royal Netherlands Navy. One of these positions was that of commander of a coast guard cutter based in Curaçao. In 2005, Walrave left the Defence organisation and transferred to the Directorate of Kingdom Relations of the Ministry of the Interior and Kingdom Relations, where his roles included Head of the Dutch Representation Office in Sint Maarten. From 2011, Walrave fulfilled various positions within the Directorate of Migration Policy of the Ministry of Justice and Security. Walrave returned to the Ministry of Defence at the beginning of 2019. View LinkedIn profile

Martijn Beerthuizen is a senior policy officer in the Department for Stabilization and Humanitarian Aid at the Ministry of Foreign Affairs, working on topics including Security Sector Reform and the Integrated Approach. Prior to his current position he was first secretary of political affairs at the Embassies in Islamabad, Pakistan and also Juba, South Sudan. Before that he worked as a policy officer at the Ministry of Security and Justice. View LinkedIn profile

Lex Gerts is deputy director of the Department for Stabilization and Humanitarian Aid at the Ministry of Foreign Affairs. Prior to his current position, he was seconded to the World Bank (Fragility, Conflict and Violence Group) and was private secretary to the Minister for BHOS, Lilianne Ploumen. Previously he was placed at the embassy Sarajevo and the PV UN in New York, among other places.

Dorith Kool is a strategic analyst at HCSS. She contributes to projects commissioned by the Dutch ministries. Her primary interest and expertise lie in fragile states, contemporary conflict dynamics and the role of the armed forces, with a special interest in the security implications of climate change. Among other topics, she has conducted research on geopolitics, geoeconomics and the nexus between water and conflict, the security sector in fragile states, civil-military relations, and migration. She also has experience working as an Arabic translator. Dorith holds a MSc in Middle Eastern Studies from Leiden University and a MSc in Military Strategic Studies from the Netherlands Defence Academy.  View profile

Major Gerard Lucius is an Operational Adviser in the Royal Netherlands' Army's 1 Civil and Military Interaction Command. A sociologist by training, he was a diplomat for 23 years and worked on political, security and development assignments in, i.a., Zambia, Afghanistan and Sudan. He fulfilled the post of Netherlands Deputy Head of Mission in Baghdad from 2012-2014. As a soldier, major Lucius' last operational tour was as Deputy Chief of Intelligence (dU2) in MINUSMA in 2019. In 2020, Gerard joined his country's ministry of Social Affairs as a Programme Manager in the Society & Integration Department. In both his civil and military careers, the integrated application of security instruments, political interventions and programme/project funding has been a constant factor. Gerard is the author of 'Effective Civil-Military Interaction in Peace Operations: theory and practice' (Springer, 2016, with Sebastiaan Rietjens) and has given lectures to civil and military audiences on that and related subjects for the past 20 years. View LinkedIn profile

René Kersten holds a position as reservist/ specialist in Policy advisor Public Governance in the Politics Network of 1 Civil Military Interaction Command. In his daily life, he works as a policy officer at the ministry of Foreign Affairs of the Kingdom of The Netherlands, dealing mainly with security policy. He has served for seven years at the ministry, working at headquarters on bilateral relations with Russia, and on diplomatic postings to Sudan and Bulgaria as a political officer. René holds degrees in security studies, political science and computer science. View LinkedIn profile

Shahrazad Chida is an SSR Officer within DCAF’s International Security Sector Advisory Team (ISSAT). She holds a MA in International Relations and Political Science from the Université d’Auvergne (Clermont-I) and has 11 years’ experience working on conflict resolution and Rule of Law dynamics in conflict-affected countries in sub-Saharan Africa.  She has held positions of DDR and SSR Officer as well as political analyst in various United Nations Peacekeeping operations, including in Mali, Côte d’Ivoire and DRC. View profile

Niagalé Bagayoko, PhD is a political scientist and Chair of the African Security Sector Network. She has done extensive field research on security systems in African Francophone countries, Western security policies (France, United States, European Union) in Africa and African conflict-management mechanisms, focusing on the interface between security and development. She has taught at the Institut d’Etudes Politiques (Science Po) in Paris. From 2010 to 2015, she managed the “peacekeeping and peacebuilding programme” at the International Organisation of La Francophonie (OIF) and was a member of the Scientific Committee of the French IRSEM (Institut de recherches stratégiques de l'Ecole militaire). She is now the Chair of the African Security Sector Network (ASSN). View profile

Natalie is Director of Transparency International’s Defence & Security global initiative having joined Transparency International in 2018.  Natalie’s background is in international development in which she holds an MSc.  She has worked in Latin America, the Middle East and Africa, including leading country programmes for international NGOs in Niger and the Democratic Republic of Congo.  Natalie spent nine years working for Save the Children during which she played a key role the establishment of the Global Education Cluster in partnership with UNICEF. View profile 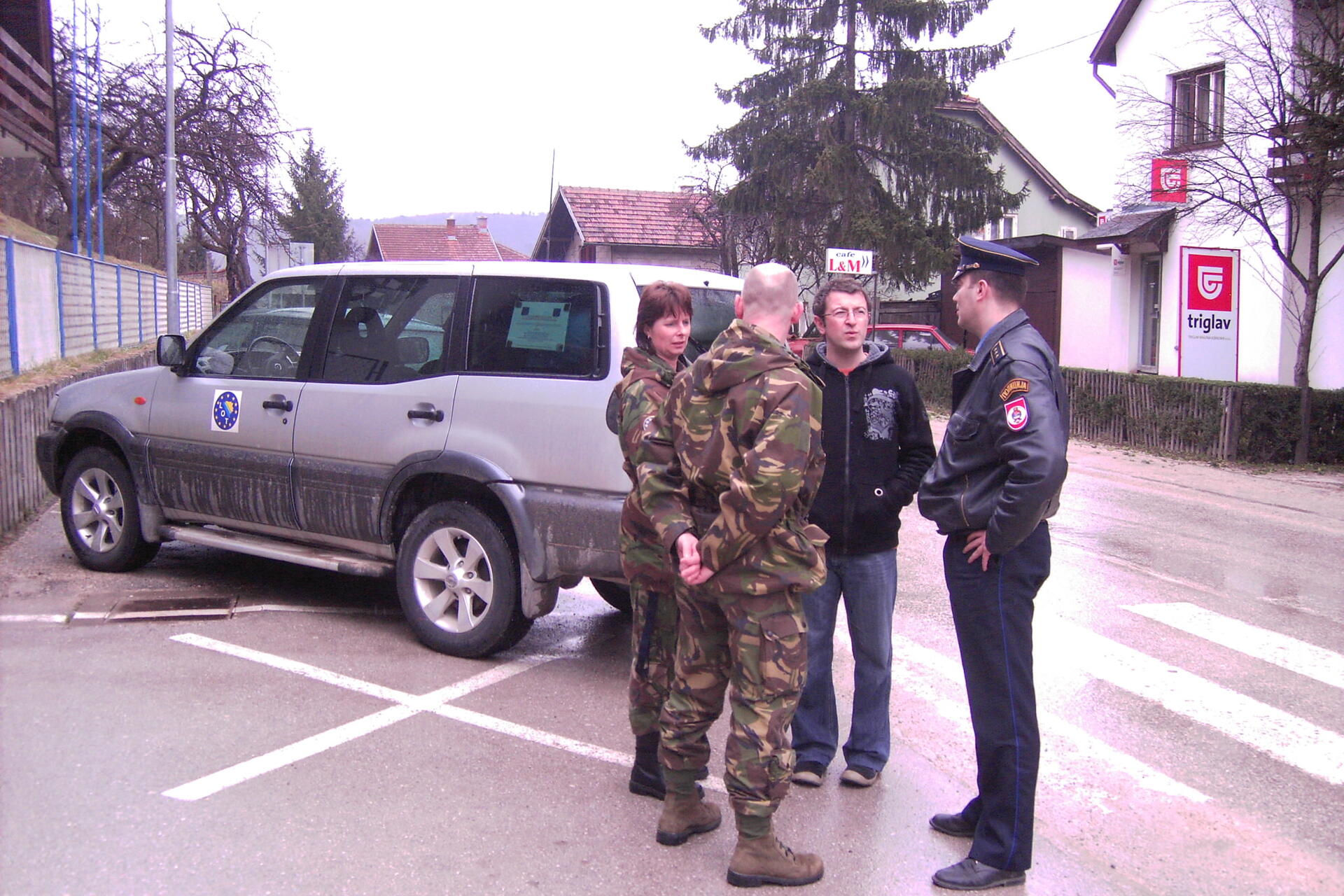